Cuba: What now for the Revolution 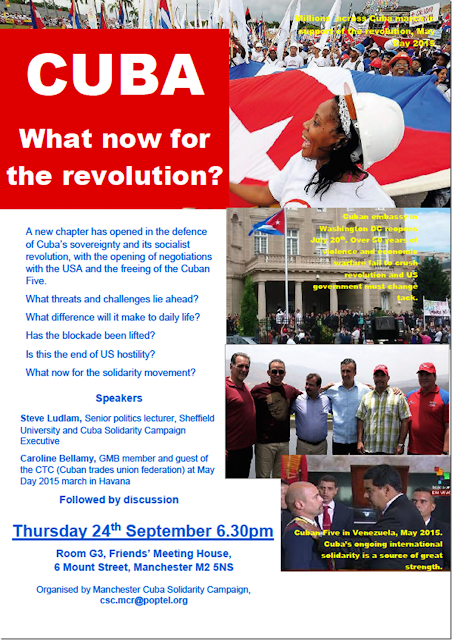 Prof. Isora Enriquez O Farrill is visiting Manchester from Cuba to attend an English Teaching conference. While she is here, she has offered to do a talk here (& in Liverpool) giving an outline of the education system in Cuba, and English teaching in Cuba.


The talk is at the Methodist Central Buildings – upstairs in the Lincoln room. 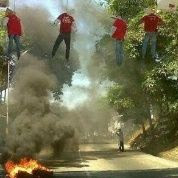 Amnesty International's latest report on Venezuela calls for justice for the dozens of people killed during the unrest that shook the country a year ago, while using sleight of hand to deflect attention away from those responsible.

See the article from Telesur here

Cuban President Raul Castro gave a speech Wednesday to say that relations between both governments will be reset.

“We have agreed to re-establish diplomatic relations, but this does not mean that the main issue has been resolved, the blockade that generates economic losses and humanitarian problems in our country must stop,” he said.

In his speech he said, “Cubans have courageously shown that, despite the adversities, the Cuban people is committed to the Revolution,” he said.

“We should take mutual steps to advance towards the normalization of the relationship between both countries” he said.

He called on President Obama to lift the half-century blockade saying, “The President could modify its implementation (of the blockade) by using his executive powers,” and in a sign of the improved relations added, “We will continue discussing these issues in the future.”

Read the rest of the article here

Alan Gross released as part of the arrangement. Article here

A Cuban Brain Drain, Courtesy of the U.S

Secretary of State John Kerry and the American ambassador to the United Nations, Samantha Power, have praised the work of Cuban doctors dispatched to treat Ebola patients in West Africa. The Centers for Disease Control and Prevention recently sent an official to a regional meeting the Cuban government convened in Havana to coordinate efforts to fight the disease. In Africa, Cuban doctors are working in American-built facilities. The epidemic has had the unexpected effect of injecting common sense into an unnecessarily poisonous relationship.

And yet, Cuban doctors serving in West Africa today could easily abandon their posts, take a taxi to the nearest American Embassy and apply for a little-known immigration program that has allowed thousands of them to defect. Those who are accepted can be on American soil within weeks, on track to becoming United States citizens.

There is much to criticize about Washington’s failed policies toward Cuba and the embargo it has imposed on the island for decades. But the Cuban Medical Professional Parole Program, which in the last fiscal year enabled 1,278 Cubans to defect while on overseas assignments, a record number, is particularly hard to justify.

It is incongruous for the United States to value the contributions of Cuban doctors who are sent by their government to assist in international crises like the 2010 Haiti earthquake while working to subvert that government by making defection so easy.

American immigration policy should give priority to the world’s neediest refugees and persecuted people. It should not be used to exacerbate the brain drain of an adversarial nation at a time when improved relations between the two countries are a worthwhile, realistic goal.

To read the rest of the article, please click here

A timely examination of human values and the health issues that affect us all, !Salud! looks at the case of Cuba, a country with what the BBC calls 'one of the world's best health systems.' From the shores of Africa to the Americas, !Salud! hits the road with some of the 28,000 Cuban health professionals serving in 68 countries, and explores the hearts and minds of international medical students in Cuba -- now numbering 30,000, including nearly 100 from the USA.

Links to websites supportive of CSC in Manchester